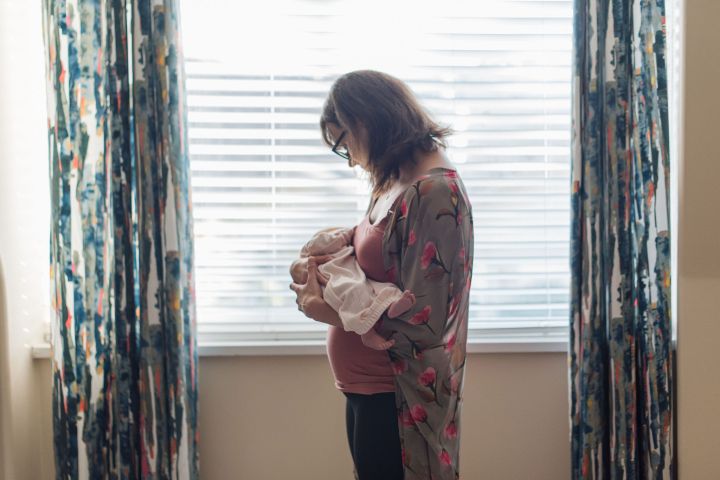 How do I put this?

There is no free time.

When I pee, there’s a toddler banging on the bathroom door (if I’ve even had a chance to close it). When I sit down during the toddler’s nap, there’s a crying baby that needs to be fed. When I get cocky and think I’ve got everything under control, my toddler decides to have a day of tantrums while refusing to eat anything other than spoonfuls of peanut butter, and the baby has blow outs, and refuses to sleep unless held perfectly upright, while walking slowly, with the oven fan on.

Even on the days I’ve had help from my own mother, and my husband had stepped in to take over parenting as soon as his foot was in the door from work, I’ve cried in the shower.

A cry of surrender. Surrendering to the idea of my own time and autonomy over my own body having to take a back seat for the next couple of years.

I have been here before with my son, the one who made me a mother. And though overall the idea of going through the trenches of this postpartum time should feel somewhat lighter (I mean, I have the perspective after all!), the reality is, it’s still fucking hard.

But I have come to accept the fact that being their mother is an all encompassing role. I keep track of the appointments. I kiss all the boo-boos. I read article after article on how to parent so they aren’t traumatized by shame, or guilt, or suppressed emotions that aren’t to be released because they are “being naughty”. I listen to the crying, the screaming, the whining (oh the whining!). I redirect the hitting and pinching. I provide the nourishment with my own body and my two hands. I agonize over how much screen time I’ve already allowed, how much time socializing with other children I’ve arranged, how often I’ve remembered to give vitamin D drops, how much tummy time was given, how many varieties of vegetables where eaten throughout the day.

I take it all on.

It feels heavy but not in a way that I don’t want to keep going.

The hardest part of having two is the constant feeling of guilt that no matter how hard I try, there is only one of me and two of them and inevitably one is getting a little bit neglected while the other one is getting most of my attention. I feel torn thinking that I’m losing time to take in my baby’s tininess because my toddler needs me to pretend I’m a dinosaur and chase him around the house – A simple moment with his mom, playing, the way it used to be before his sister came along. And then I feel equally as torn when I’m cooing and doing my best to memorize my baby’s sweet little nuances before she grows out of them while the incessant sound of my toddler desperately repeating, “Mommy! Mommy! Mommmmmmy!” provides the soundtrack to our quiet quality time together.

I’m exhausted but grateful for my children. They are pushing me in a way I’ve never been pushed. Physically. Emotionally.

I just can’t shake the feeling of how incredibly important and personally transformative my role as “mother” is.

And so with clenched teeth, I will keep going, day by day, through these trenches, knowing (wishing, praying) that eventually things with feel easier and I will look back at these times and smile.

One thought on “Mother”